With the professional racquetball players using racquets that cost hundreds of dollars combined with equipment and court cost, sometimes it seems too expensive to play racquetball.

It doesn’t have to be though. I’m here to tell you all about cheap racquetball racquets just so you can start playing tomorrow without dropping a lot of money on racket.

When I first started playing racquetball, I didn’t drop $100 on a new racket. How was I even supposed to know that I liked racquetball that much? No, I walked in my local sports store, spotted an attendant, and said “hey what’s a good cheap racquetball raquet? Preferably under $50.” And he helped me find one!

Now my job is to be that nice store attendant to everybody reading this article. If you’re looking for a nice racquetball racquet but don’t want to break the bank, I have some suggestions. 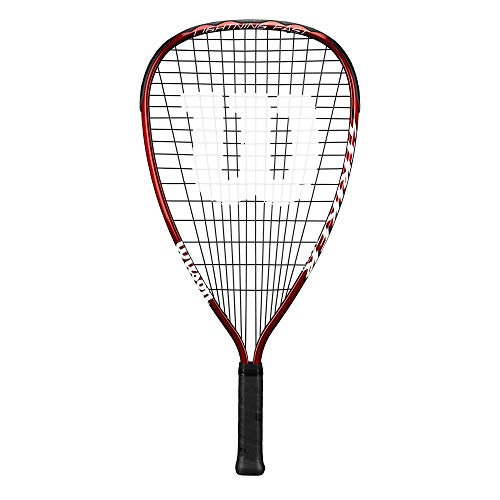 If you are a beginner player and just looking to play once or twice a week, the Wilson Striker is perfect for your needs. It’s a racquet that will allow you to smash the racquetball in no time.

If you’re looking for a racquetball racquet with a slightly bigger head size, look towards the Ektelon PowerRing Freak racquet. This cheap racquetball racquet has a 105cm head size giving beginner players plenty of space with which to hit the ball. The frame of the racquet is made from Aerolite Alloy making it lightweight yet durable. 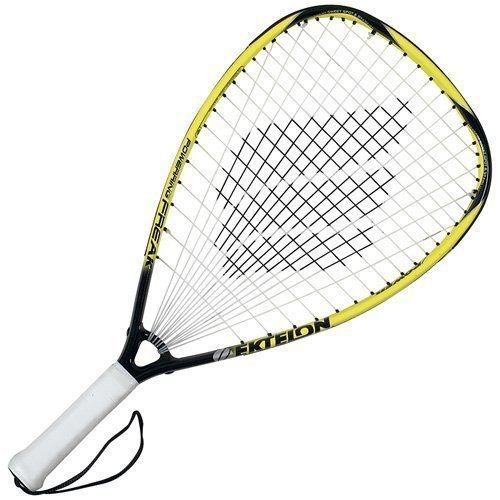 The name PowerRing comes from the inverted ring in the throat of the frame. Longer strings are attached to that ring giving the whole racket more power across the string bed.

Overall, if you are looking for a racket that will give you the best bang for the buck, the Ektelon PowerRing is for you. It even comes with a wrist strap so you won’t lose your grip on it and accidentally throw the racquet at a wall! 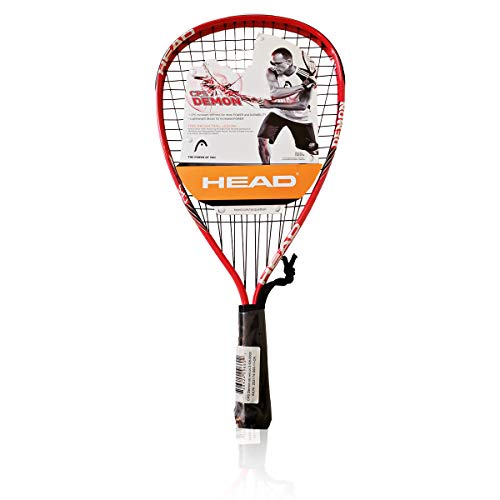 Coming in at 9.6 oz’s, the CPS demon is lightweight with a stiff frame. The stiff frame provides players with more power and makes the racket more durable. Now, other players I’ve spoken too have said that the paint on this racquet tends to chip easier than normal. Personally, as long as the racquet plays well, I don’t really care.

The CPS in the name stands for crystal power system. Head claims to have incorporated a special molecular structure into the frame in order to make it stiff and give players more power. Obviously, I couldn’t pull out a microscope to see if it was true, but when I was playing with the CPS demon, it felt responsive and powerful in my hand.

One thing I did notice is the lack of the wrist strap on this racquet. To make up for this, Head makes the CPS demon with a special synthetic grip designed to especially tacky for players.

If you’re looking for a racquetball racquet for cheap, you can’t go wrong with the Head CPS Demon.

For the money, this starter racquetball pack might be the best deal if you start from absolutely nothing. This pack includes the HEAD MX hurricane racquetball racquet, one pair of protective eyewear, and 2 racquetballs. 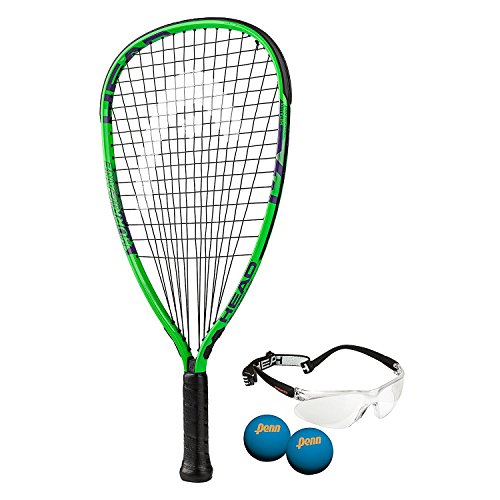 For people looking for an all-in-one racquetball solution for cheap, this Head MX hurricane pack is for you. One suggestion I would have though is to invest in higher quality protective goggles. There are multiple racquetball goggles for cheap and protecting yourself is very important! It’s far better to spend an extra $5 dollars(seriously, that’s how cheap goggles can be), then walking out with a black eye after either a ball or another racquet hits you. 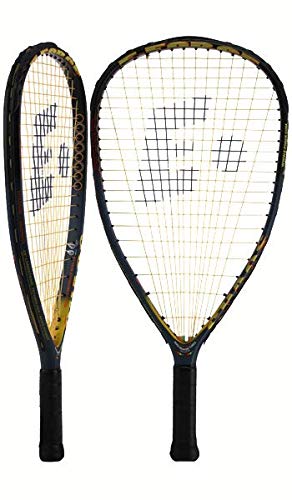 I mean, seriously, the E-Force Chaos made our list of the best racquetball racquets, is one of E-Forces best racquets, and for the price, it’s an absolute steal for anybody from beginner to intermediate. With a 107 sq inch head and a quadraform shape, beginner players can easily hit the ball from any angle or direction. This racquet weighs in at just over 7 oz giving you enough weight to smash the ball easily but not make you tired after hours of playing.

So we know the E-Force Chaos racquet can give us power, but can we control it? It turns out the answer to that too is yes. This cheap racquetball racquet coes with zero richter tube technology which dampens vibrations immensely.

If you’ve ever played with a racket without vibration dampening, it’s pretty hard to control. With a combination of this technology and monster string holes(allows strings to be anchored on the outside of the frame), the E-Force Chaos packs an absolute punch and gives players the ability to control where the ball goes.

For just a little more than the rest of the racquets on this cheap racquetball racquets list, you can get a racquet that will last you years. If you’re looking to play recreationally but dominate your opponents, the E-Force Chaos might be for you.