While light, the Head Black Widow is one of the most powerful racquets I’ve ever played with. In this review, we’ll examine the advantages and disadvantages of this racquetball racquet. 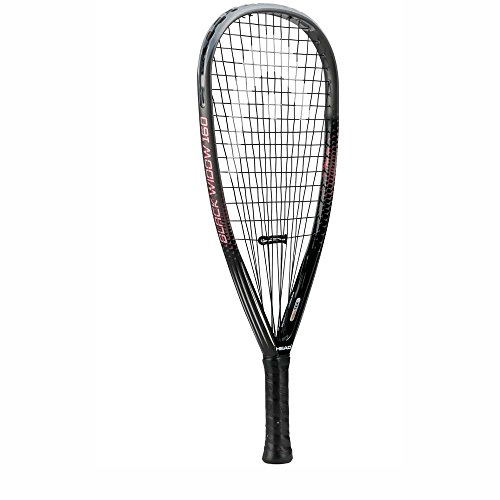 Let’s start by going over the technical specs of this racquetball racquet. We’ll go over each specification and what they mean.

Playing with the Head Black Widow

Personally, I love the Black Widow, it’s a very powerful racquet even though it is one of the lightest racquets in production. My playing style usually puts me further up the court than most others would go but that sort of style really fits this racquet.

Because it is light, it is maneuverable and as long as I can keep up with the ball, I can return anything. From the back court it’s possible to nail a kill shot every time with deadly accuracy

Light and maneuverable on the court, the Head Black Widow is perfect for aggressive players.

Of course, a smarter option is often a ceiling shot, which the Head Black Widow also excels at hitting.

The praises being sung do come with some drawbacks though. Being so light means that you have to possess very good swing mechanics to get the power out of this racquet. If you do not have a defined swing or your swing is not very fast, this racquet probably isn’t the one for you.

Another thing is that the Head Black Widow racquet is very fragile. I’ve owned 3 of these racquets and not one of them has survived more than a brush against the wall or the floor.

This series of Head Racquets (Black Widow 160, Scorpion 170, Cobra 180) was the first to be made primarily from carbon fiber. Head was the first to design a racquet with carbon fiber and I applaud their efforts. Neither the scorpion nor the cobra suffer from this breakability issue.

But pushing the Black widow to 160g, it seems as though head was concerned that the material wouldn’t be strong enough to hold the tension of the strings and compensated by beefing up the frame to hold the strings. This causes any additional force applied (such as a hit against a wall) to fracture this racquet.

The Black Widow is an old design by head from 2012, but it still holds up in tournament play. I’ve seen all types of players use this racquet with typical varying degrees of success.

Head has started moving their lighter racquets to more of a triangle shape which is called the Delta –Head. This is to push the balance point further towards the head of the racquet and also solves some of the issues with breaking racquets.

The newest series of racquets by head (Graphene XT) are all the Delta-Head shape, but their previous series the Radical and Radical Pro are all more of a tear drop shape. So the design isn’t outdated or bad in any way.

Who Should Play With the Head Black Widow?

I recommend this racquet to an intermediate or advanced player with a cautious swing but aggressive strategy decisions. Make sure you don’t hit anything other than the ball and this racquet will win you tournaments and leagues time and time again.

If you feel like your 170g or 175g racquet is a touch too heavy or you are just looking for a little bit of extra speed and maneuverability. This is the racquet you should be using. Having such a light racquet be balanced provides incredible amounts of control over the ball, it’s almost surreal.

If you are a beginner, pick up the scorpion 170 or the cobra 180 and practice with either of them for a while. If you get used to playing with either of them and feel like they are too heavy, that would be the point at which you should pick up a Black Widow. Both of those racquets are the same shape and balance which is what a beginner should be focusing on in terms of racquet selection.