Described as some of the best pickleball paddles on the market, Paddletek is among the top pickleball brands today. Their technology and design make them a preferred choice for professional pickleball players across major tournaments nationally and internationally.

Each of Paddletek’s paddle comes with a lifetime manufacturer’s limited warranty. Showing their confidence in their paddles, they also provide a guarantee that none of their paddles will develop a dead spot within 5 years.

Paddletek is currently an industry leader and consistently offer advice to other brands in the space, like Prince, in order to assist them with their own line of pickleball paddles.

We’ve heard brands use the term above to describe their products but with Paddletek the words stand true to its offering. Tempest Wave, Phoenix Pro, Bantam EX-L and Element – some of Paddletek’s most popular paddles are pushing paddle technology to a whole new level.

There aren’t many brands which can compete with Paddletek with regards to its features and expertise.

That’s the primary reason why Prince collaborated with Paddletek – to seek technical assistance and be assured that they would be designing great pickleball paddles for players.

Paddletek pickleball paddles are different from what the market has to offer. We can see that in their latest paddles which boast a unique round shape – quite similar to that of an oversized racket in tennis.

These designs are preferred by players switching over from tennis to pickleball as they prefer a paddle with a larger sweet spot.

Originally founded in 2010, Paddletek paddles are relatively new. Cody Smith started the company originally and his brother, Curtis Smith, quickly joined the growing company. They started, as many companies do, by talking to potential customers. Both brothers went to the National Pickleball Tournament and asked questions of the amateur and professional players there. What would make a perfect paddle? After extensive Q&As, theoretically, the Paddletek founders knew what the players loved and exactly what elements were missing from their favorite paddles.

Normal paddles are the standard 16” x 8” paddles we see in the market. Elongated paddles are near the region of 17” x 7” paddles which makes them longer and less wide. The emergence of elongated paddles can be accredited to the desire for players to have more reach. Though executing a shot does become difficult as the sweet spot reduces, elongated paddles give pickleball players a longer reach as compared to standard paddles. These paddles generally aren’t for beginners, as their use does require a modification to the traditional playing style. 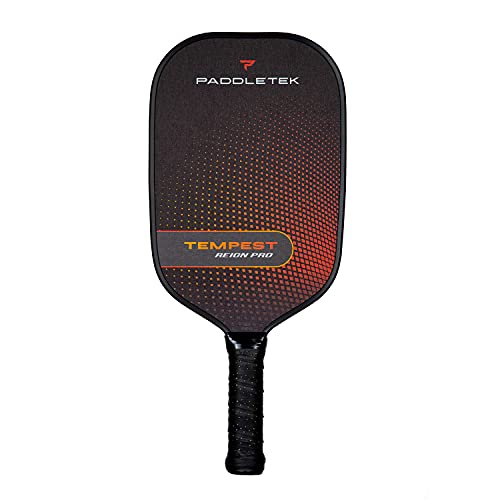 The Paddletek Tempest – An elongated paddle offering from Paddletek.

Apart from these, there are several other classic paddles such as Stratus, Power Play, Horizon and ELO which aren’t listed there. Paddletek also offers a Junior Pickleball Paddle known as the Paddletek Ranger.

The Paddletek Tempest Wave exceeded everyone’s expectations and landed in the hands of top pickleball players. You can see several renowned players including Aspen Kern, Daniel Moore and Dave Weinbach using this paddle at national tournaments. There’s a reason why this paddle was named as the official US Open Pickleball Championships paddle in 2017. It truly brought waves with its introduction to the world of pickleball. 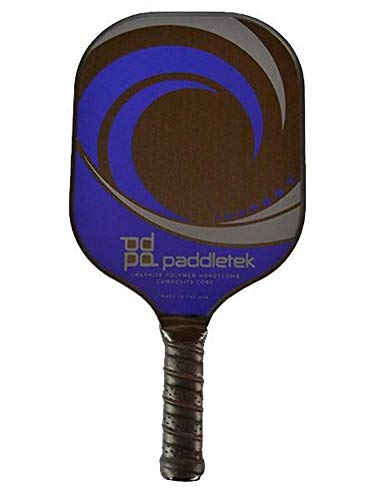 Weighing under 8oz, Tempest Wave is 1.4oz heavier than the general pickleball paddles which weigh between 7.5oz to 7.9oz. It features Paddletek’s homebred Advanced ProPolyCore technology which helps dampen vibration. Keeping the community in mind, these paddles are designed in a way to minimize the noise level which makes it perfect for a green zone. With 4.25 grip circumference, it has a large sweet spot along with a traditional body shape with 5” handle and 16”x 8” paddle face

Paddletek’s Phoenix Pro meets all the USAPA guidelines. Similar to all the other paddles, its core helps dampen the vibration which reduces the noise. Similar to Tempest Wave, the Phoenix Pro features the Pro Poly Core as well which makes it an ideal choice on any pickleball court around the world.

Phoenix Pro is ideal for power and control – a well-balanced paddle, though heavier, is perfect for power shots. Though heavier, it’s designed to offer maximum balance and hit controlled shots. It’s the most affordable Paddletek Pickleball Paddle available in the market today. 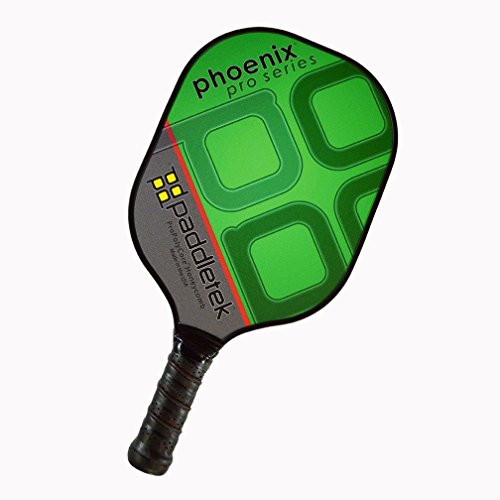 Weighing at 8.5oz, it’s 0.5oz heavier than Tempest Wave. It uses the extra weight to pack more power and punch as compared to its compatriot. With 4.25 grip circumference, the Phoenix Pro features a large paddle face with velvet textured surface. This paddle is perfect for people looking for overall balance, large sweet spot and a good grip. Preferably those, wanting to achieve more power and improved spin.

A champion’s testimony, Paddletek’s Bantam EX-L screams performance. Bantam EX-L similar to the Phoenix Pro is designed for not just advanced players but for intermediate as well. If you’re looking for raw power, then this Paddletekpaddle is truly meant for you. A distinguishing factor in this paddle is that it’s medium weight and varies between 7.8oz to 8.03oz. The heavier the paddle the more powerful your shots. As for technology, it features Paddletek’s trademark ProPolyCore2 which helps reduce vibration. On face, it features textures which help achieve amazing spin on your shots. 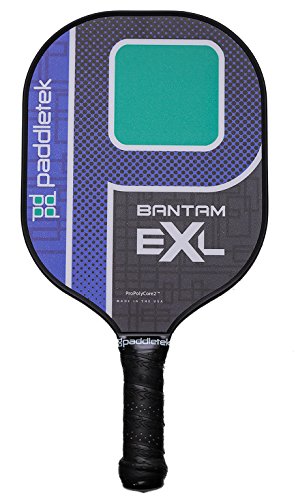 The Paddletek Bantam EX-L with its velvet poly surface is inarguably one of the best paddles in the market if you love to play spin shots. In the words of pickleball champ, Daniel Moore: If you’re a singles competitor, then Bantam EX-L can be your preferred choice over Tempest Wave. With 7-7/8” wide face, you get a good amount of room along with 5/18” long handle. The structure of this paddle helps to prevent overextension. Its small grip size is padded, allowing comfortable shot execution. In terms of design, the Bantam EX-L features a geometric vinyl decal with high-tech fiberglass face.

Paddletek Horizon is the only elongated paddle to feature on our list. A lot of advanced players prefer this paddle to maximize their reach. Its shape helps increase your return rate considerably and in pickleball, where every inch can make a difference, it can help you cover more of the court. It features an oblong sweet spot, which allows you to hit better shot. Though not a preferred choice in doubles play, Paddletek’s Horizon is amongst the best selling elongated pickleball paddle in the market today. Not only is it cost-effective, but also an exceptional paddle. It offers a great amount of versatility in shots thereby exposing the opponent’s defense. 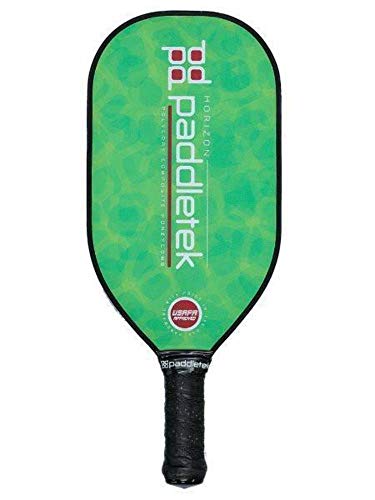 For people who have just started playing, Horizon is not ideal because it has a narrow sweet spot.. Nonetheless, if you have a good experience, then you’d absolutely love this paddle. The most unique aspect is its extremely lightweight, weighing between 7.2-7.4oz. At 4.5” long handle, you get a decent length which is important for overall control and feel. The grip is designed to absorb shocks thereby enhancing overall comfort.

Sabre Pro is US Open Triple Crown winner Scott Moore’s preferred choice. It’s amongst Paddletek’s premium line of paddles and has all the right ingredients to be termed as a winner’s paddle. Along with excellent construction, it has a streamlined designed which adds to powerful and effective shots. 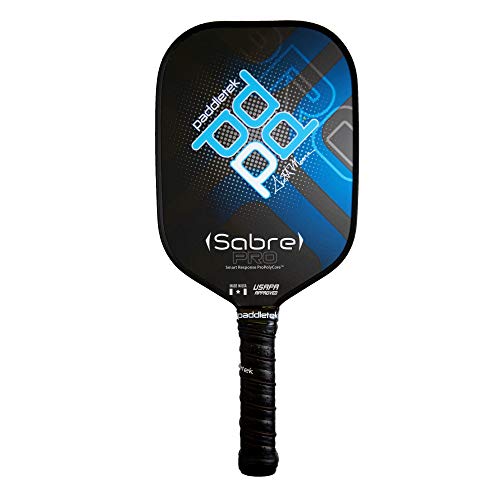 Paddletek Sabre Pro has an extra-long handle clocking in at 6-1/4”.The increased handle size helps achieve reach and bring down the unused surface area. Thus, not only does it have a sweet spot, it has a speed spot, which enables you to hit your shots with power and speed. This high-performing base makes Sabre Pro responsive, highly reactive paddle capable of catapulting powerful and accurate shots. With Paddletek’s logo mirroring at the center of its face in a swirling pattern, design-wise, it does not disappoint.