Prince made a big splash among other pickleball manufacturers with their broad logo: “Changing the Shape of Pickleball.” The statement itself is a bold one, setting the expectations high right away. Prince – the legendary tennis equipment manufacturer entered the world of pickleball relatively recently in 2018.

Wanting to capitalize on an incredible pickleball momentum, Prince is following the footsteps of other legendary tennis equipment manufacturers such as Head and Wilson to set a foothold in this ever-growing racquet sports industry.

History of Prince in Racquet Sports

Prince has been among the big 3 manufacturers (Head, Wilson, and Prince) leading the space in the racquet manufacturing industry since 1970. After being founded by Robert M. McClure of New Jersey, Prince saw Howard Head join the company and become the chairman of the company.

Throughout these years, Prince has amazed professionals and admirers of sports through the introduction of equipment that redefined the sporting landscape. Their most notable contributions can be seen in the sport of squash and Tennis. Even today, Prince continues to innovate and shape trends in the world of racquet sports.

How Does Prince’s Entry Influence the Sport of Pickleball?

Back in the day, the Prince Classic changed the sport of tennis. By introducing the world’s first oversized head tennis racket, the company offered an increased sweet spot: an absurd fantasy at the time. While many players believe that the shape of a paddle doesn’t really matter, others see it as a revolution and a welcome change, which carries great importance.

A change in shape and design can be a major difference-maker as the style of play differs from player to player. Larger sweet spot results in better connections and thus overall improved performance. But is Prince capable of changing the sport?

It can and it will. Because it’s not alone. Prince has tied up with Paddletekto create one of the finest pickleball paddles on the market. Currently, there are 4 Prince models which include the Response and Response Pro, Spectrum, and Spectrum Pro. Having seen considerable success since its entry, Prince launched a 5th paddle named Quantum, which is performing extremely well in the market.

Prince made a smart move by announcing itself to the world of pickleball in a partnership with Paddletek. Prince might be an established racquet manufacturer but is relatively new to the sport of pickleball. Thus, instead of headbutting into the sport and falling flat, they let the existing pickleball paddle manufacturing company – Paddletek, share the burden.

The collaboration has yielded great results as together, these two companies have delivered technologically advanced pickleball paddles, capable of delivering exceptional power and control. Want to see one prominent example? Simone Jardim, a top-ranked pickleball player used the Prince Response Pro (link) at the 2018 US Open and won a triple crown – 3 gold medals in 3 professional events.

Prince was already familiar with the shape of their paddles and the designs to be implemented. However, they didn’t have much experience with the components of a paddle. Here’s where Paddletek’s expertise comes into play. The manufacturer is a cornerstone in the pickleball sport for manufacturing paddles with polymer honeycomb cores.

In this collaboration, they designed the thickest core for Prince – 9/16-inch. The thicker the core, the better the response upon connection. If you have a big or longer swing, thicker poly core composite paddles absorb more power which in turn helps return powerful shots.

For players who have a softer hit, the core helps produce less bounce which helps hit softer lobs. Overall, Paddletek’s engineering and Prince’s design have gone on to achieve considerable success as the paddle is preferred by intermediate and advanced players alike.

Since all the paddles are made of composite material, they’re slightly on the heavier side. However, the manufacturer has offered options for players to choose between light and standard version.

Now, this is clever, because players who consider paddle weight as a big influencing factor, this offers them a custom window. A light Prince paddle typically weighs between 7.1-7.6oz. Standard paddles weigh between 7.7-8.1oz.

Advanced players typically opt for the standard variant as it offers incredible shot control. With it, you can easily control a match and execute dinking shots. As far as performance is concerned, the three paddles with its two variants each have left no stones unturned.

They deliver everything you’d expect from a premium paddle and much more. Like other pickleball paddle manufacturers, Prince also offers grip variations. You can choose a 4 ⅛” grip or a 4 ⅜” grip. This option is a boon for transitioning players, especially those who played tennis and are jumping ship pickleball.

The Response Pro paddle is a champion’s choice. With its well-rounded design including an innovative shape, this paddle offers a large sweet spot along with a gentle touch. It’s thick polymer construction helps the overall pickleball paddle generate an incredible amount of power in every shot. Controlling speed and direction have never been this easy. 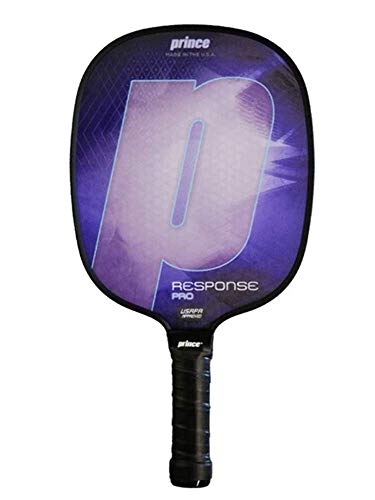 The Prince Response Pro features an 8-1/4” width a slim edge guard which provides ample usable space. It has one of the largest sweet spots helping newer players connect smoothly with the ball, thereby delivering consistent performance.

Furthermore, players have a better grip and control in their shots thanks to an impressive 5-1/2” handle. The paddle can be ordered in a small or medium size grip across multiple weight ranges.

Owing to its extra-large sweet spot, you’ll be able to execute the best of shots without any compromise with the Prince Spectrum Pro. Even with a soft feel, this pickleball paddle is capable of smashing advanced players upon sensing an opening.

Its quality construction features a thick polymer core which helps provide responsive nature through the entire paddle surface area. The Prince Spectrum Pro is simply too good for the composite fiberglass paddles in similar price ranges. It’s amongst the most complete pickleball paddles. 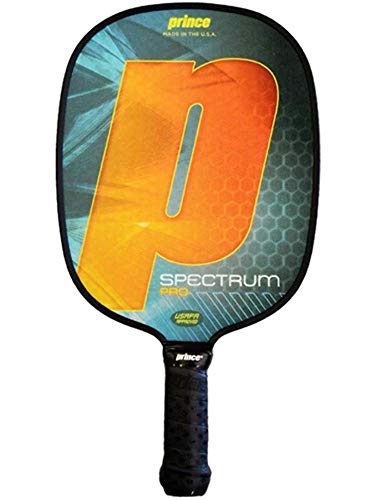 The Prince Spectrum Pro features a 9/16” thick core which offers a linear progressive feel meaning that the power you exert gets transferred to the ball smoothly. If you need a well-rounded paddle for shots consistency and overall balanced performance, you should look no further than Prince Spectrum Pro.

The latest paddle to join the successive range of Prince paddles is the Quantum Pro. Featuring a reactive Progressive Core Technology, the paddle offers great momentum and power generation to the players. With its unconventional 16-3/8inch length, you can derive maximum power in your shots.

Similar to the length, the handle is long at 6″ as well. It’s quite suitable for players who love backhands and want more reach when running across the pickleball court. 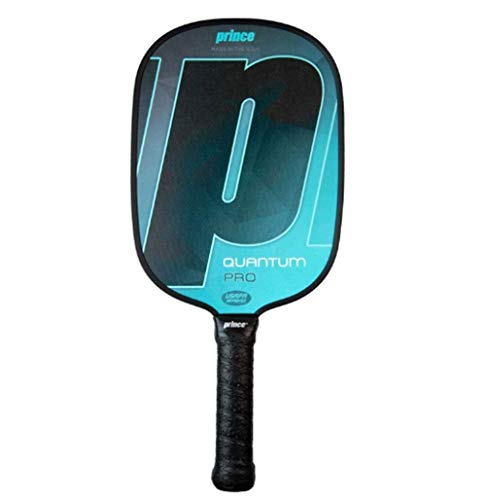 The Prince Quantum Pro generates great pop when a shot connects on its large sweet spot. The handle length is comfortable and boosts your confidence when holding the paddle. Weighing between 7.4-7.8oz, the Prince Quantum Pro is generally a light to middleweight paddle which is perfect for well-rounded balance and shot execution.

Overall, the Prince Pickleball paddles fall in the same price range meaning that your paddle choice should largely depend upon your playing style. If you want a new, state-of-art paddle, you can choose Quantum Pro. However, if you want a traditional more popular paddle, you can go with the Response Pro or the Spectrum Pro.

By and large, all these paddles have a large sweet spot and the polymer core is designed to offer power and accuracy in your shots. Looking through Prince’s current selection of best pickleball paddles, one thing is clear: Prince pickleball paddles are worth every penny and are as good as any premium pickleball paddle can get.