Providing quality paddles fused with the latest technology, Selkirk paddles can be seen across the country with both recreational and professional players choosing the brand over its competitors. Using the best quality materials and high-end production techniques, Selkirk paddles stand out from its competition. Each paddle comes with a color coordinated grip and the production year printed on it. Today, we’ll be revealing the history of Selkirk Pickleball Paddles and our personal choices for the top 5 Selkirk Pickleball Paddles.

Selkirk Sport, based in Hayden, Idaho, began its journey in 2013. Brothers Mike and Rob Barnes joined hands with their dad Jim and Rob’s father-in-law Russell Heisluman and put their individual skills to craft premium paddles which deliver high-quality performance.

With in-house printing boasting state-of-the-art technology and striking graphics, Selkirk provides the best of both worlds.

Though it’s been in the pickleball scene for the past 6 years, it captured major ground when it announced its AMPED paddle line in 2017.

With the announcement of AMPED paddle line, Selkirk pushed the technological limits straight to the edge. From innovative core materials to unique face, everything they introduced at that time was an upgrade to their existing range of legendary paddles.

The AMPed paddle line features 6 paddles –Regal, S2, Omni, Epic, Maxima and Invikta with five of those available in the lightweight and middleweight category. These paddles were introduced only as a midweight option in 2017. However, banking on the success of these initial paddles, Selkirk launched the lightweight ones a year after.

Though expensive, Selkirk pickleball paddles have become a household name in the past couple of years.

A Cross-Over Option for Tennis Players

Much of Selkirk’s success can be accredited to tennis and racquetball players who jump ships to try their luck in pickleball. For them, the AMPed paddles i.e. the brand’s flagship option has become a preferred option. The new core present in these current crops of paddles intrigues beginners, intermediates and advanced players alike.

The overall feel of these paddles along with the technical prowess it brings to the table is unmatched. However, the brand doesn’t just offer AMPed paddles, it also offers budget-friendly Prime paddles.

What’s the difference between these two? Read below.

Through the introduction of the X4 Core, Selkirk wanted to cater to a wider range of audience. With X4, Selkirk offers similar balance and control but without the additional technological features with X5 Core.

Difference? It’s mostly got to do with price and features. With Prime models, Selkirk tried to revive their legendary paddles before the 2017-era which introduced the brand to the pickleball scene.

Furthermore, the cost difference is quite notable too. If you’re a beginner, you can get your hands-on Prime range before moving towards the AMPed range

Featured the latest technology in pickleball, the Epic X5 FiberFlex paddle is a new design in a traditional framework. It features a long handle which provides a pleasant feel. Its wide face compliments the edges and has a great sweet spot. Players who love heavy head paddles simple love this paddle. Overall, the Epic AMPed provides you with all-around capabilities with reduced noise and vibration. 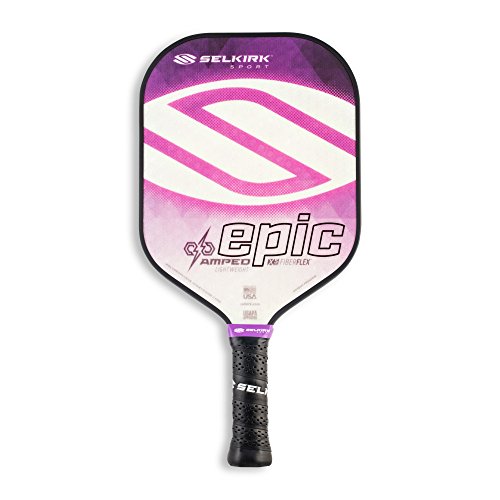 With a unique face and leading X5 core at them, the AMPed Epic X5 provides tremendous power and control. Hitting or returning rallies become easier with this paddle. You can choose between a standard or a lightweight paddle with a standard or a thin grip size based upon your preference. If you go for a thin grip, it’ll reduce the weight by .02 ounces.

With the largest surface area in the entire AMPed line, the Selkirk S2 AMPed offers incredible versatility. With its broad face and a great sweet spot, the connection is always smooth. Its FiberFlex face and technologically advanced core allow you to land your shots where you intend to with great consistency. Furthermore, the shots generate less more annoying sound due to the absorption. 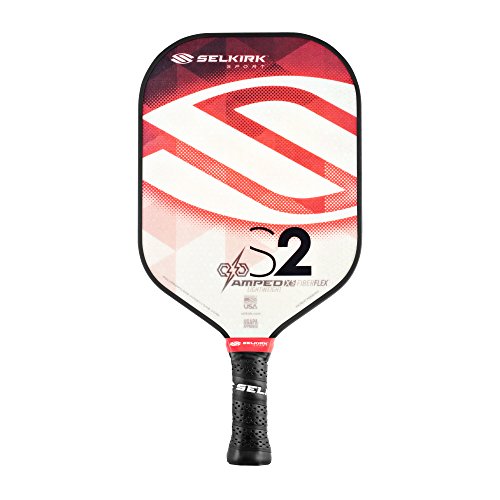 Weighing between 7.6-8.02oz, the AMPed S2 offers considerable weight option to choose from. As compared to the other AMPed paddles, its handle is a little shorter because of its bigger face. Similar to the Epic AMPed, you can choose between standard or lightweight along with a standard or thin grip.

Perhaps the most pocket-friendly option from Selkirk, the Prime Epic makes it to the list because of the cost variable. Still, can’t take anything away from the freakish control that it has to offer. Featuring an X4 Core, the Prime Epic offers similar balance and control as the AMPed models but without the premium features. However, the Prime Epic does offer a solid grip and allows you to hold any game by the scruff of its neck. 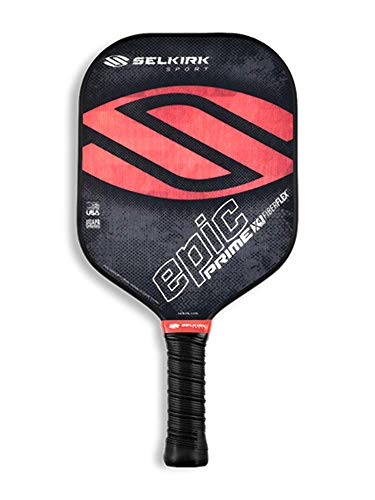 With its 7.3-7.8oz weight, it falls in the lightweight paddle category. It’s ideal for people with big hands as it has a long handle of 5-1/4”. Though it’s not as customizable as the AMPed range, it’s definitely more affordable. Visually, the Selkirk Prime looks bold with a black background and technically it allows you to react faster on returns regardless of how hard a hit is coming your way.

Personally, this is one of the paddles with the finest visual appeal. However, it’s not just visually attractive but it’s technically powerful. It’s designed for intermediate players who already have a great amount of control. Maxima is designed for maximum flexibility and its elongated face helps players achieve incredible reach. If your reflexes are on point, this paddle enables you to reply to any shot that comes your way. Another impressive aspect about this paddle is that although it has a long surface, its handle is still of reasonable size and therefore it provides the perfect grip. 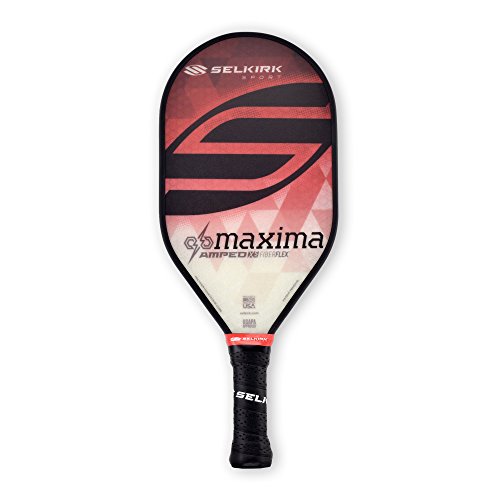 With a length of 17”, the AMPed Maxima is definitely one of the longest paddles. With the x5 core, you get the premium technology along with the elongated surface. Thus, regardless of where you decide to hit, when you do it, you’ll do so with perfection. It’s perfect for longer shot rallies and return volleys. Similar to the other AMPed paddles, you can customize this grip and the choose the weight as per your preference.

Finally, the paddle to wrap up the list is Selkirk’s AMPed Invikta. Though it features on the fifth spot, it’s amongst the most popular pickleball paddles in the market. Designed in-line with National Champion Tyson McGuffin’s vision, the Selkirk Invikta offers extreme reach along with belter of a sweet spot. Its touch and versatility are vouched for. Though it’s an elongated paddle, its comfortable handle length ensures maximum maneuverability. 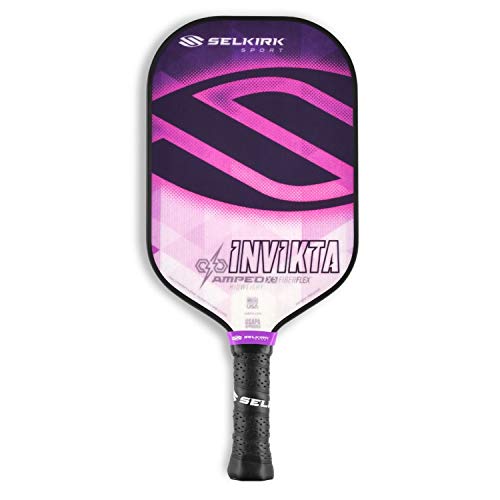 Weighing between 7.3-8.4 oz, the Invikta X5 offers a lot of options for the players to choose from. Its X5 core helps you to drill down the balls and win matches with its overall balance. With Invikta, you’re always controlled and composed which ultimately allows you to be consistent on the pitch.

Personally, I prefer Selkirk premium paddles over its competitors. However, if you’re just getting started, I’d suggest you start with prime paddles and then move towards the AMPed paddles. The prime paddles will help you perfect the basics and will prepare you for the advanced upgrade when the time comes.