Talk about mega sports equipment brands capitalizing on the pickleball momentum and you’ll find Wilson at the forefront. Wilson was the first global racquet brand to associate itself with the sport of pickleball. In this article, we will present to you all our best Wilson pickleball paddle reviews.

Wilson Sporting goods company, based in Chicago is a subsidiary of Amer Sports– A Finnish Group. It has completed a century in sports tennis equipment manufacturing. In the past 6 years, they have gained considerable ground among the tight-knit pickleball community.

Wilson, a Chicago-based company, was founded in the year 1913 and has been in business for more than 100 years. The company started out named Ashland Manufacturing Company which was well-versed with manufacturing sporting goods. Since the start, Wilson has built a reputation for manufacturing quality racquets and balls for tennis.

Most touted for its best tennis racquets, the equipment giant also caters to sports such as basketball, golf, football, baseball, tennis and finally pickleball. For information about their dominance in tennis, check out the best Wilson tennis racquets (link).

Wilson made its entry into pickleball in 2013. Since, its arrival, pickleball has grown into a massive sport. Wilson has taken a 3 pronged approach in order to gain market share in the pickleball market.

In 2018, Wilson announced its collaboration with Engage Pickleball. It’s an exclusive partnership between the two brands where both the companies will manufacture paddles in the same manufacturing facilities.

All these paddles are available online and can be bought from Amazon as well. Furthermore, you should know that the shape and grip size in all “Wilson By Engage” paddles are the same.

That’s where the similarities end though. Each of the new and old Wilson pickleball paddles have specific aspects that make them ideal for different pickleball players.

For this list, I’ll be covering paddles from the pre and pro-Engage era since all the products are available on the market. Another reason why I’d like to include the earlier models is that those classic paddles are still preferred by a lot of pickleball players.

The Wilson profile team pickleball paddle is one of the company’s classic offerings. A lone paddle in its product line, the Profile to date is Wilson’s most beloved offering. It features a thicker polymer core to provide excellent balance to the players.

While all the newer paddles are mostly light and middleweight, the Profile is one of the heaviest paddles weighing in at around 8.4oz and averaging between 8.3-8.5oz. Most of the crossover players from tennis prefer these paddles along with senior paddles. The overall weight and feel of the paddle are perfect for players who prefer power and connection. 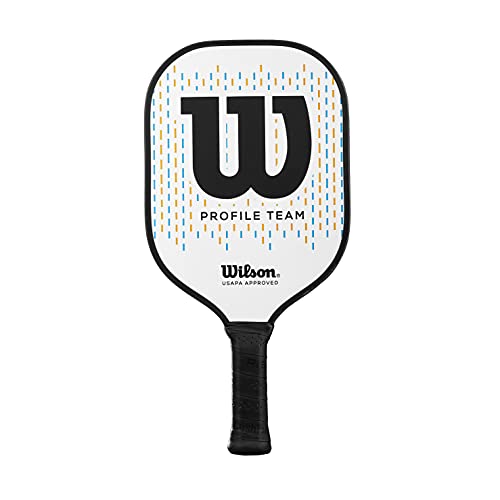 As for specifications, this Wilson profile pickleball paddle features a 5” long handle and a large 4 3/8 grip. Everything about the design screams tennis. With a textured graphite surface, players can achieve a great amount of control and spin.

Due to its classic shape, it has a large sweet spot. Add the weight factor and you get a solid pickleball paddle designed to hit power shots with control. Furthermore, this Wilson pickleball paddle is among the most affordable paddle.

Wilson Tour Pro is the heaviest paddle in the Pro-Engage era. Weighing between 8.1-8.5oz, this paddle is meant for power serving and baseline shots. The exclusive Fiberglass hitting zone helps generate great pop and feel. Infused with the polymer power comb technology, the Wilson Tour Pro, though a heavyweight paddle offers a softer feel and better control.

Furthermore, the paddle is extremely durable owing to Shock Stop Dampening Bumper Guard which protects it against abrasion. With a cushioned perforated grip, you get great grip and overall comfort while executing the shots. 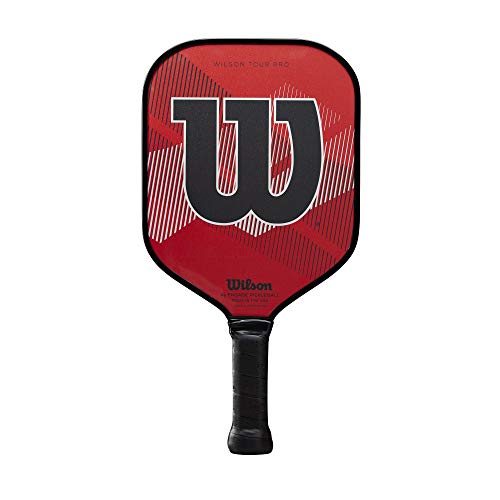 Wilson Tour Pro features an 8.25” width and 15.5” size which gives it the classic paddle feel capable of sweet connection. With the heavyweight, the Wilson Tour Pro is best used by intermediate to advanced players and maybe players who are switching over from other racquet sports such as tennis. With that said, Wilson Tour is amongst the most expensive pickleball paddles in ‘Wilson by Engage’ range.

A lightweight paddle makes its debut on this list of best Wilson pickleball paddles! The Surge Lite as the name suggests is the lite version of the original Surge paddle. A uniqueness about this paddle is that it features a similar composite face as its sibling but is much lighter. If you’re a player who loves small grips and wouldn’t like much weight, then Wilson Surge Lite would be perfect for you. 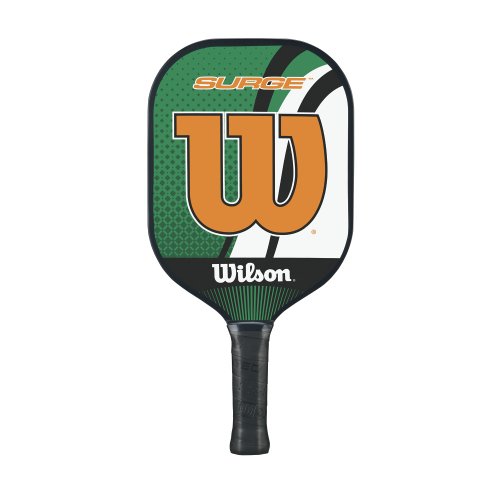 Wilson Surge Lite features an 8.25” width and 15.5” paddle length, common in all pickleball paddles. Surge Lite unlike Surge or Tour Pro is meant for players who are starting with their pickleball journey.

With its lightweight construction, you can achieve great spin and learn to execute shots with accuracy and precision. The Surge Lite is more about technique and precision than power serves and baseline hitting. Especially if you love to play near the net, this should be paddle you should pick.

At the time when its predecessor paddle was launched in 2014, it was the lightest paddle in the Wilson pickleball paddle range. Ranging between 7.6-7.8oz weight, some suggest that these paddles were initially rolled out at 7.3oz.

Nonetheless, either weight belongs to the lightweight category. It features polymer fiberglass composite blend which helps to distribute energy across the entire paddle core in order to generate more power. 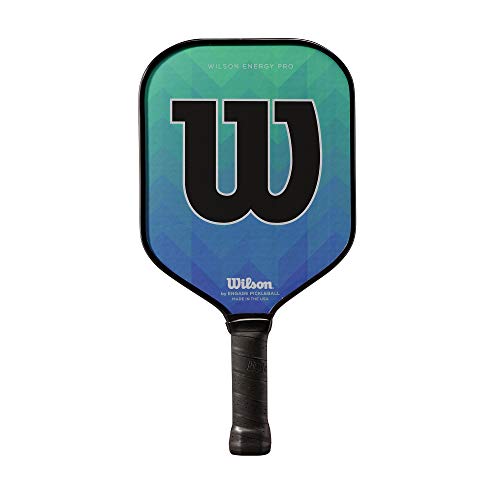 Wilson Energy Pro features a 5” handle and 4 1/8”, it’s ideal for you if you have smaller hands. Due to its lightweight construction, its easier to swing than some other pickleball paddles from Wilson.

The Wilson Energy Pro draws influence from the original Energy paddle revealed in 2014 and that’s the reason why specifications of both the products are so similar. With Nomex core, this paddle offers a solid feel whilst being lightweight.

My last pick belongs from the Pre-Engage era and that is Wilson’s Tour BLX Blade. At the time, Wilson introduced the basalt fiber weave to the sport with this paddle. While quite distinctive and unique among other pickleball paddles, the basalt fiber weave does not contribute much to the feel of the overall paddle. Overall, the Wilson Tour BLX is a sturdy paddle capable of offering both consistent power and accuracy. 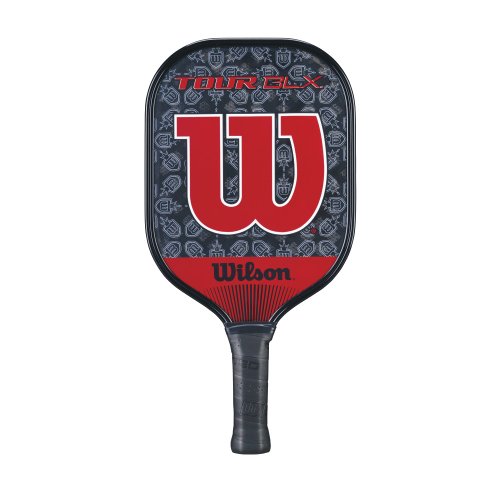 This is amongst the heaviest paddles in the pickleball with a weight close to 9oz. It’s a heavyweight paddle which allows the players to generate that more power and punch required to cross the line.

On the entry-level side, Wilson has the Energy Pro and Profile Paddle for beginners and intermediate players getting into pickleball. Based on your pickleball level, you can choose which product you want to buy.

I personally love the latest Wilson by Engage paddles. However, the classic paddles are the ones which introduced many players to the sport. Overall though, it’s exciting to have Wilson as part of this growing pickleball community. With them putting their resources, energy, and efforts whilst collaborating with an established pickleball paddle manufacturers show how dedicated they are to the sport.

All we can expect from the brand is that they follow the current line of exciting paddles with even better ones, which I’m sure they will. Lastly, I’ll sum this guide by following points, so it helps you choose the right Wilson pickleball paddle.

I hope these one-line takeaways helped you understand the products better.