Julian here. Recently I’ve been delving into smart tennis sensors and I came across the Zepp Tennis Sensor.

Everybody I talked to has had mixed thoughts about this device. That’s why I thought I’d get to the bottom of it with an in-depth review.

Want the low-down quickly? Here it is.

Zepp Labs was founded in 2011 by a group of athletes who realized the opportunity in smart sensors for sports. They make sensors for baseball, golf, tennis, softball, and soccer.

The Zepp Tennis Sensor is a small disc shaped sensor that you can simply attach to the bottom of your tennis racquet. It weighs less than 6 grams which is lightweight enough that most players never even notice the sensor on the racquet. There are 3 different ways you can install it on your racquet 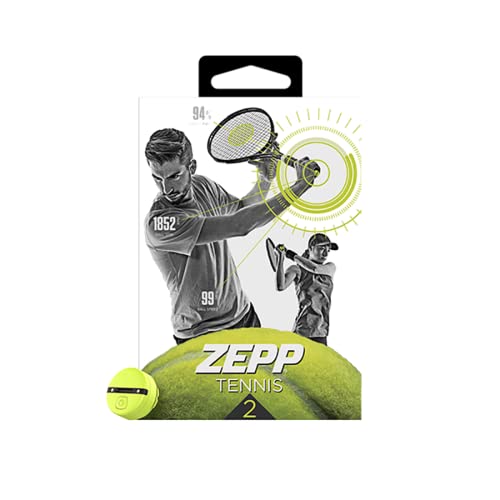 The Flex Mount (15 grams – only works on select mounts)

For ease of use, the Insert Mount is clearly the best. To use it you simply remove the butt cap on your racquet and install the sensor instead. The Flex Mount requires a slight plastic mount to be attached to the base of your racquet. This mount can be slightly annoying, especially if you love to grip your racquet low on the handle.

The Insert Mount for the Zepp Tennis Sensor fits cleanly into the butt of your racket.

The Zepp Tennis sensor itself features dual accelerometers, dual 3-axis gyroscopes and flash storage memory which holds up to 2,000 swings. The small sensor features an impressive 8 hour battery life. Charging is done over USB and can take between 1 to 2 hours.

The Zepp Tennis Sensor works a lot like most other smart tennis sensors. First you have to install the app on your phone. Then you can pair with the sensor over Bluetooth.

Some people have reported trouble pairing the sensor with the app but I did not have any issues during my practice session with the Zepp sensor. After the app is connected with the sensor, you can even leave your phone on the side of the court which is useful for people who don’t like having a heavy phone in their pockets while they play.

The Zepp tennis sensor states that it can capture up to 1000 data points/second. On the app, you can see the breakdown between stroke types. You can see the number of forehands, backhands, and volleys you’ve done during the match. For each stroke, you can see where the ball hit the racket. The app automatically determines your sweet spot accuracy.

One nifty feature, when it works, is that you can see the spin type of each stroke you hit. Do you use a lot of top spin? Or are you trying to improve your top spin? Check the app to see if you’re improving from practice to practice.

On the new version of the sensor, you can also see the ball speed. Pretty useful when talking to your friends about how you hit a 60 mph forehand yesterday. At least, that’s what I used it for!

Also with the app, you get access to video tips, drills, and match strategy specific to your play style which helps you transition to the next level in tennis. The videos and drills are created by 4 top tennis coaches to help you improve your game.

One of the coolest features of this sensor is the ability to see your serve motion in 3D. The sensor says it’ll show you the exact path that your racquet took during your serve. While there were some issues with it while I played with the sensor, when it worked, it looked amazing.

I also really liked the ability to monitor the spin on your different strokes. I’ve personally been trying to increase the amount of top spin I use on my backhand and the Zepp tennis sensor was able to provide me with clear data in order to do so.

One feature I particularly liked, compared to other smart tennis sensors, was the overall score it gives you based on your play during your practice or game.

The score is a composite measure of your play during the time. I found myself trying to increase the score as I continued practicing using the app.

Unfortunately, the bad outweighs the good when it comes to the Zepp tennis sensor. While this sensor is able to classify strokes, a major selling point is being able to see the motion of your serve.

However, when I played with the sensor, I found that it had major issues detecting serves.

Talking with some of my friends, it appears I’m not alone. Consistently, the Zepp tennis sensor would not detect serves or misclassify them as forehands or backhands. Very annoying if you’re trying to improve your serve.

This issue continued with the rest of the tracking. Overall throughout my practice sessions, the tracking was inconsistent to say the best. There would be 30 minutes where it wouldn’t pick up any data. And then, the next 30 minutes it would pick up everything. There was no consistency or rhythm to when it decided to work or not work.

Additionally, while I didn’t have issues with this personally, apparently a number of people have had issues with calibration. To calibrate the sensor you simply put the racquet on a flat surface for a few seconds and press Calibrate in the app. This process completely failed for some issues and for others, it was woefully wrong.

Unfortunately, the things that make the Zepp Tennis Sensor so good are overshadowed by the bad parts. After all, the data is only good if the sensor is actually working.

In my limited time with the device and through interviews with other players, this sensor isn’t consistent enough to warrant a purchase.

All is not lost however!