With over 3 million players and counting, pickleball is not only a phenomenon amongst the players but also the brands supporting it. The prevision of pickleball’s growth has garnered the attention of the brands, who are now heavily investing in the production of pickleball equipment.

Among the many brands that entered the pickleball supplier domain, the connoisseur of composite paddles also made his foray into the pickleball world. We’re talking about Gearbox –the renowned paddles manufacturer who is known for creating commendable pro games paddles.

If you’re new to the game, you should know that if you want to put the ‘pedal to the metal,’ this is the ‘Gearbox’ you need. The company has designed several unibody paddles in its San Francisco manufacturing unit. If you are looking for Gearbox paddles you can consider the ones below.

There are many paddle manufacturing companies in the market and they have an assortment of paddles in their lineup. These paddles are usually named after their properties or construction but sometimes these names can get confusing and indecipherable.

Gearbox has found a better and simple solution in terms of naming their original series paddles; as Seven, Eight, and Nine. These are not mere numbers; they represent the weights of the paddle i.e. 7 oz, 8 oz, and 9 oz.

High heat and pressure are used in the construction process to mold the paddle into a solid piece of equipment.

Get ready to hit the next level of dinking with the older sibling of G2. It has the same shape, size, and weight as the G2 but unlike its predecessor, it comes with an upgraded core.

Swinging this paddle sends a clear message, that you mean serious business. The paddle has made its mark among players with its unique features that include Solid Span Construction and weighs 7.8 ounces.

This paddle is used by pro tournament players and is a flagship model of the brand.

Here we have entered the line of paddles that come with fusion technology. Carrying forward the legacy of the G7’s the GH7 is a specially handcrafted paddle featuring the latest H7 technology. The H7 is a new type of polypropylene honeycomb core that renders optimal balance.

A minor upgrade form the GH7, this paddle with its elongated head lets you cover a wider area. The GH7L features the same core as the GH7.

The Seven Pro is an upgrade to the original seven series; it comes with the same shape, size, and carbon fiber Solid-Span Technology (SST). As an upgrade, the paddle comes with Hyperbite Technology.

Just like the Seven Pro, the Eight Pro is an upgrade to the original eight series. The paddle features the same weight, dimension, and upgrade but comes with a Solid-Span Technology core.

The Gearbox originals or the mother paddles marked the foray of Gearbox in the world of pickleball. These paddles feature intelligent design, a unibody structure, and well-balanced construction.

Get ready to hit the next level of dinking with the older sibling of G2. It has the same shape, size, and weight as the G2 but unlike its predecessor, it comes with an upgraded core.

There are two very special features of this paddle that could lure you into buying it. First, the paddle is constructed in a way that it can outlast the spin as compared to the other paddles. Second, it is a great performance paddle and looks great with an attractive design. 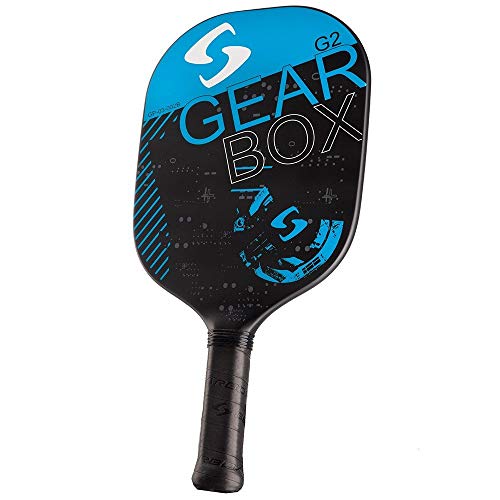 It has a standard weight and comes with two types of grip sizes. These factors are of utmost importance if you are looking for a good paddle, as comfort is a crucial factor when playing. Here are some other features of the paddle.

The G7 and G2 share similarities when it comes to appearance and dimensions. However, G7 comes with the new Solid Span Technology core. The new core is made of handmade layers using the rib and chamber structure, this new type of core is known to give better strength. 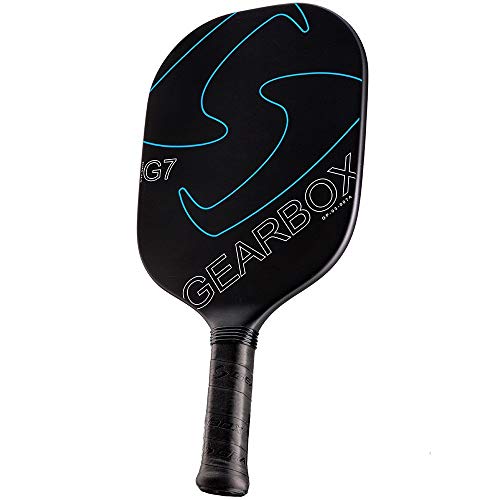 Moreover, the single-piece construction keeps the paddle from breaking or splitting apart.

The G11 is a very popular paddle amongst pickleball players. This amazing piece of equipment defied the people’s belief that the paddle might vibrate due to the single-piece construction. But with the new solid span technology, the bat doesn’t vibrate. 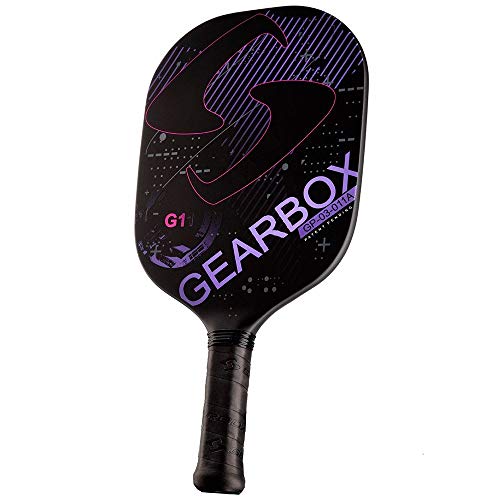 This paddle has been designed to offer comfort to the players with a soft grip and a maximized sweet spot. However, the lack and need forthe protective rim is clearly evident as the paddle begins to show signs of visual damage at the edges.

The Gearbox GH7 is created using Fiber H7 Technology. It features a meticulous design that has been constructed from the honeycomb core to the composite face. This adds excellent playability and improved overall durability. 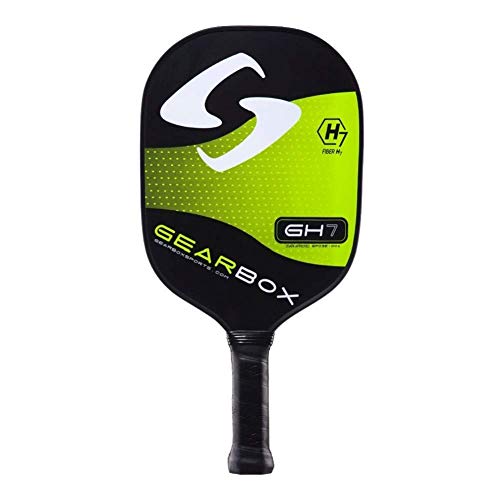 GH7 has one of the best honeycomb paddles that offers a traditional feel, perfect balance, soft sound, control& power, durability along with an elegant look that comes at a very affordable price.

The GH7L is an elongated version of the GH7. The paddle is created using fiber H7 technology that involves meticulous construction of a paddle layer by layer, from the core to the composite face. 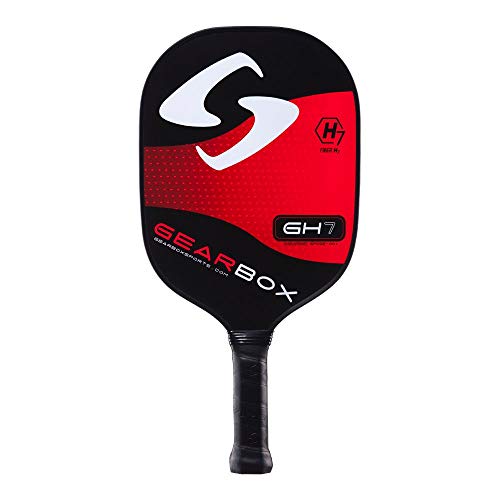 Its unique construction offers the players a superior hitting surface, durability, and playability. The GH7L is among the widely preferred paddle in its class. It includes Hyperbite Spin Technology which gives you an extra edge against your opponent. The GH7L also offers impressive durability, soft sound and an attractive appearance.

The Seven Pro is an advanced version of the original Gearbox Seven that was launched in the year 2015. It features a teardrop-shaped edgeless head that gives it quickness, rapid movement, and superior control. 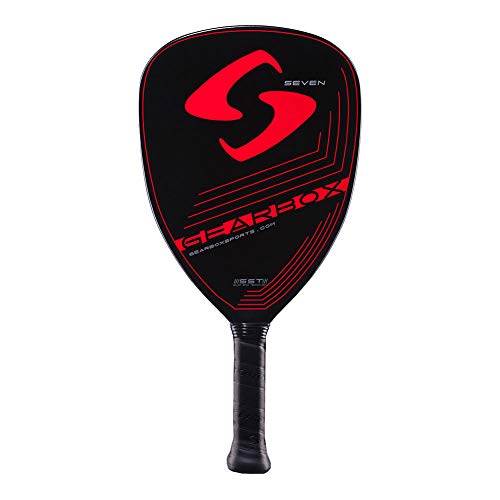 Gearbox has also integrated its latest Hyper Bite Spin technology to make this paddle even better for the players. This technology adds a spin to your hits with a softer sound and feel. The paddle handle has a natural feel in hand with a good grip shape.

The paddle is lightweight and is a perfect choice for accurate shots.

The Gearbox Eight Pro is just a weight added version of the seven pro due to its weight it is suitable for players who play heavy shots. The paddle has a carbon fiber composition with a Patent Pending Solid Span Technology (SST). 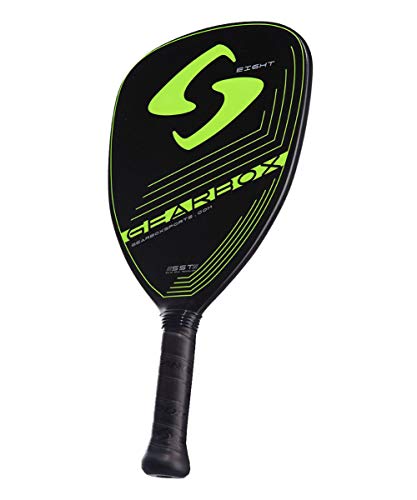 The paddle has a Hyper Bite Spin Technology that adds spin to your shots, which gives you a competitive against your opponents. It also has a massive sweet spot that offers comfort and easy control.

A Glance at Gearbox

The interesting thing about Gearbox’s history is that it is just a decade old. But don’t let that fool you. It is the prowess of Rafael Filippini that lends perfection to each and every product manufactured by Gearbox.

Rafael Filippini is a renowned professional racquetball player with over 25 years of experience in the composite industry. His sheer dedication towards learning and creating revolutionary technology for athletes led to the foundation of Gearbox.

To watch a breakdown of Gearbox paddles, you can watch this video:

Its G11 series went on to be widely popular among players.

Even though pickleball and racquetball are two different games, Gearbox has used its expertise to create paddles that make the game fun while enhancing the player’s performance. A Gearbox paddle comes with benefits like:

Gearbox paddles are created with a commendable formula which gives them a distinctive edge over their competitors. Some of the paddles may share a common resemblance but they have their own proficiencies.

Here are some common qualities of Gearbox paddles that make them the first choice of pro players.

Gearbox is known for making paddles that make playing convenient and fun for the players. To which the company has created edgeless paddles to free the players from the inconvenient plastic edge guard.

The most common problem that amateur players face when choosing a paddle is USAPA approval. The regulatory body of pickleball, USA Pickleball Association (USAPA) has specified the dimensions of the bat that are permitted for tournaments.

However, you don’t have to worry about that at all, as the entire series of paddles made by Gearbox is USAPA approved and can be used for all major tournaments.

Among the many complaints that players have about edgeless paddles, the most common one remains the splitting of layers. The main reason behind this is the lack of support at the edges to prevent them from separating.

Gearbox’s unibody construction puts an end to the splitting problem. 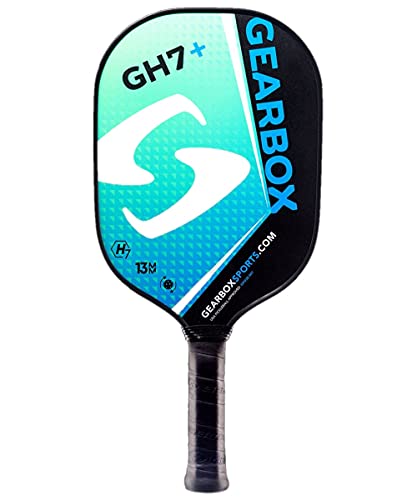 In addition to its single-piece structure, Gearbox has made its paddles even better by using carbon fiber as its key material. It provides an even surface and by eliminating the honeycomb core, the company has flawlessly leveled the surface. Due to this, the longevity of the paddle increases, and there are no dead spots as seen in most honeycomb core paddles.

This makes Gearbox paddles even better, as the company offers a full year warranty covering all the defects.

Gearbox paddles are designed to keep different playing styles in mind. Its innovative technology combined with the finesse of craftsmanship has attracted players and also enhanced their performance.