Pickleball is gaining popularity around the world as people are starting to enjoy this fun sport. The fact that it combines all forms of sports that use a racket such as tennis, badminton, and table tennis has incited curiosity among the players who play those games.

Professionals from different sports disciplines and budding athletes alike have started to take the game seriously. There are international tournaments held around the world and there are pickleball courts in every state around the US.

Pickleball is an interesting game and it certainly has a bright future. According to research, the game has seen a 650 percent increase in the number of players in recent years. Pickleball is also said to be related to health benefits. People who have been playing the game, have experienced lowered levels of depression. Enough about the stats and science, let’s dive deeper into the net heights starting with the sports’ history.

The similarity between tennis and pickleball can take you back to the time when the game was invented. It was a clever improvisation during a badminton game that led to the birth of pickleball. The creators of the game were unable to find a shuttlecock to play a game of badminton, so they replaced it with a wiffle ball, lowered the net, and created paddles from plywood from the nearby shed to replace the badminton rackets.

If you are new to the concept of pickleball, the game is very simple and similar to tennis or table tennis. There are two players on either side of the court, and they have to score points by preventing the other team from hitting the ball back into your court. To see or learn how to play pickleball you can watch this video:

Since the game is yet to be introduced to many people around the world; it can be hard to find a pickleball court to play the game. Though the game seems like it could be played on any tennis court, you’ve to settle for a makeshift court which will take the essence away. Having said that, people who are deprived of actual pickleball courts often settle for any court. Which begs an answer to the following question:

Can a Tennis Court be improvised into a Pickleball Court?

Pickleball is mostly played outdoors than indoors and most of the time it is played by improvising a tennis court. The improvisation can include adjusting the net, marking the court, setting up barricades, and more. If you are looking forward to converting a tennis court into pickleball court, you refer to this video:

Even though you ignore the dimensions of the court, you need to ensure that the net is fixed properly. In pickleball, the net plays a vital role along with the other apparatus that include the waffle ball and paddles. It may have the placement and fixation like a tennis court, you will have to make the necessary changes in order to make regulation compliant.

Regulations for using the net according to the USAPA

Unlike other budding sports around the world, pickleball is well established and regulated. The USA Pickleball Association is the national governing body of the game in the US. It provides players with official rules, tournaments, rankings and promotional materials. Among the many rules that are created to ensure fair play, the most important rule refers to the setup of the court.

The main purpose of the net in pickleball is:

This is why the net should not have too wide gaps that let the ball through. It should be made of mesh and have holes of the size that do not allow the ball to pass. 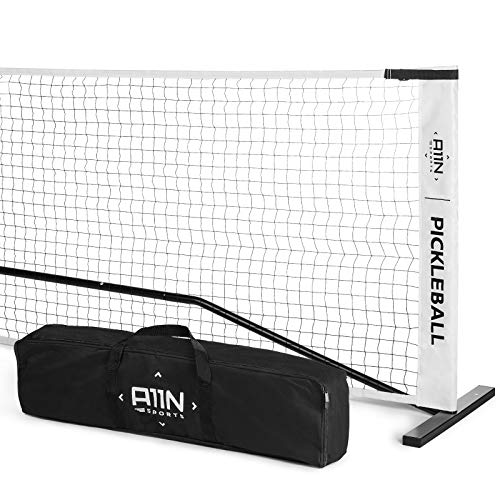 The USAPA’s guidelines also suggest the measurement of the net that can be used for a pickleball game.

The USAPA recommends the use of center strap for easy adjustment of height at the center of the net. However, center straps are only recommended for permanent pickleball courts.

The top edge of the net should have a 2 inch (5.08 cm) white tape that covers the binding cord or cable running through the net. This binding must rest upon the cable or the cord. 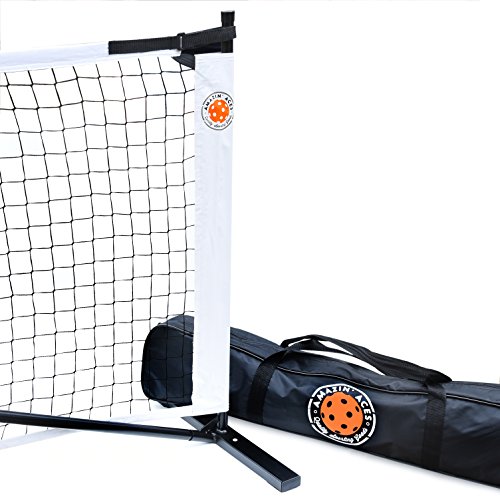 The net posts should be placed at a distance of 22 feet (6.71 m) from one another and the maximum diameter of each post should be 3 inches (7.62 cm)

The lack of pickleball courts around the world is a big concern for players. To which the USAPA has suggested some adjustments that can be made to existing tennis courts and turn them into pickleball courts:

1. One court per tennis court

Tennis courts are quite sizable when compared to a pickleball court. Hence, they can be used as pickleball courts by making minor adjustments such as lowering the net to 34 inches, marking the courts with blue tape considering pickleball court measurements, and finally barricading the sides to avoid running far for the ball.

If you are planning to turn a tennis court into a pickleball court permanently, the same can be done with minor changes. However, there are some things you might have to spend your money on. According to the image below, you will have to mark the courts keeping the regulatory measurements in mind. Once the marking is complete, you have to set up the fencing and nets that will be required for the game.

Pickleball is a sport that is worth trying at least once. I hope that the above information helps you while playing pickleball. If you have any queries or suggestions, you can write them in the comments below.