The Arcsaber 10 is one of the racquets that stand the true test of time. Almost 10 years old now, it has had multiple variations and endorsements by pro players, discontinued, and then re-endorsed again. Players such as Peter Gade and Taufik Hidiyat have stamped their names on this legendary racquet, and for good reason too.

The Arcsaber 10 is the definition of an all rounder racquet. It does not excel at either singles or doubles play, but you cannot go wrong with its even-to-slightly head heavy balance, and medium-stiff flexible shaft. 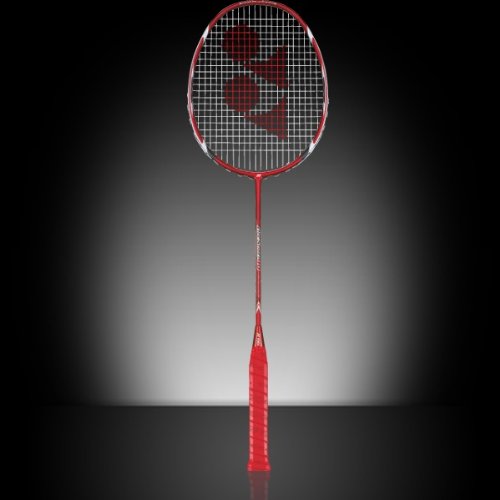 This racquet is not part of the big smasher category. What it does do well in the smash category is provide a solid, tactile feeling.

The flex of the shaft is easy for intermediate and advanced players to generate power, without using too much strength. This allows the player to play longer and harder without fatigue. The maneuverability of this racquet compared to a heavier one lets you get behind the shuttle quicker and deliver unexpected smashes that racquets such as the Z Force II would not allow.

As a fan of head heavy racquets, I was a bit disappointed with the power I was able to generate compared to my usual Astrox 88D, but the tradeoff for movability is worth it for some players.

As I mentioned earlier, this racquet is not a smasher’s first choice. It is for more of a tactical player, for the ones that enjoy getting to the bird early and changing the pace and dropping. This is where the racquet shines.

The Yonex Arcsaber 10 is available in multiple different versions. Only the color and style changes, NOT the specifications.

The lighter head allows for quick racquet movement changes, while being heavy enough to keep the racquet path stable. The response from the racquet on impact is very solid, which is a common theme with older Yonex racquets, such as Armortecs and Musclepowers.

While the head weight is less important in singles than doubles at the net area, the Arcsaber 10 is deadly in both the front and rear court. As mentioned before, the maneuverability really helps the racquet shine, and will reward players with fast reaction times, allowing for fast cutoffs and driving exchanges.

Moving the racquet for net shots and kills is effortless. Whether you are coming from either a heavier or lighter balanced racquet, you will feel at ease with the Arcsaber 10 and adjust very quickly to its timings.

Hitting defensive shots allows tactical players to do the most damage. Turning the defense into offense is almost graceful with this racquet, with the smallest movements allowing redirection of the shuttle. Whether you want to drive, block or lift, this racquet will do it with ease.

The even balanced head helps to carry the racquet forward, where a head light racquet may struggle. The balance of the racquet really does help with the defensive shots. It is light enough so that smashes are no issue, while being heavy enough that the force of the smash won’t blow back the racquet.

Personally, I feel like this is one of Yonex’s greatest racquets ever made. At the time of this article, there are 6 versions of this racquet. (Please note that there is no difference between the different versions, besides the colour and signature. All materials inside the racquet are the same).

Players, old and new alike, will choose the Arcsaber 10 as a first racquet, replacement racquet, or backup racquet for its ease of use and all-roundedness without lacking badly in any area. This is the definition of an all rounder racquet. For players who are looking to stray a bit in head weight either way, down below there are suggestions for adding or reducing head weight.

I recommend this racquet for any player, beginner, intermediate or advanced. Be careful with your string tension, since the frame is an older design, Yonex only warranties it up to 24lbs, although I have strung them up to 27lbs.