If you are playing tennis for the first time, any racket you look at might not seem different than the other. But, a tennis racket is not just some piece of wood shaped in the form of a bat and strung with wire designed to hit the ball, it is a product of innovation and clever design.

Every tennis racket is made of different parts that are fused together. However, some parts of a tennis racket are modified to make the game convenient for the players. There are rules and guidelines for tennis racquets that are allowed in the game.

To avoid picking the wrong tennis racket, watch these important mistakes you need to avoid:

Knowing about the different parts of the racket can be helpful as it enables you to find the racket that can complement your performance.

Let’s learn about the different parts of a tennis racket and how they help you play.

Parts of a tennis racket:

The head is the most important part of the racket, and it is used for hitting the ball. It has strings woven into it that are designed to absorb the pressure and vibrations generated from the ball’s impact.

The size of the racquet’s head can affect the game of a player to a great extent. It adds or reduces the power in the hits of the player. There is a basic thumb rule that is to be followed in terms of racket sizes i.e. the larger the head size, the higher the power in every hit.

Rackets with large heads tend to affect the control over speed and range that a player has while playing. Conversely, rackets with smaller heads contribute to better control and are much easier to maneuver. So, if you are looking for control, you will have to sacrifice power and vice-versa.

Here are the different racket sizes that are used in the game:

If you see a tennis racket closely, you will notice that the top part of the racket is a little thicker than the others. It is commonly known as the beam. This particular part adds weight to the head of the racket, but it does not have any effect on the height of the racket. However, it does affect the overall feel of the game. Rackets with wider beams tend to have higher power and an increased trampoline effect.

A tennis racket endures a lot of shock, abrasions, and impact during a game. They are hit, rub, and even banged on the ground while playing, to which bumper guards do a great job protecting them. These are thin strips that are wrapped around the head of a racket. 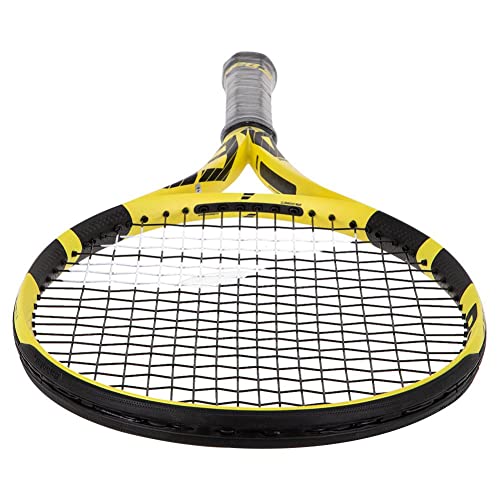 Since bumper guards have to bear a lot, therefore, most of them are made of plastic. The bumper guard is placed on the parts that face the impact a lot.

Bumper guards need to be replaced over the course of time as they can scrape the frame of the racket frame and can even cause them to crack if left unchecked.

A tennis racket’s head alone is made of many things, as you can see, most of them contribute to the performance of a player. However, like bumper guards, some protect the racket and its components. Grommets are one of them as they protect the strings of your racket. 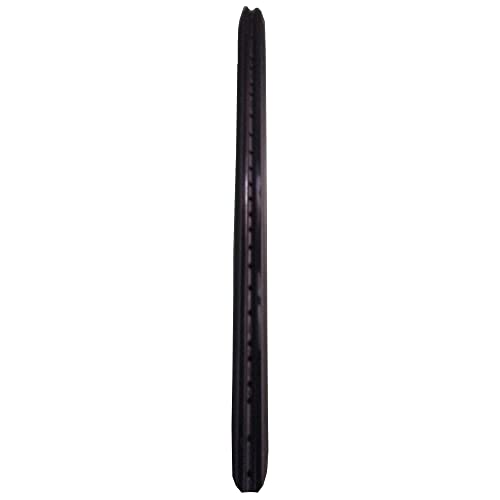 Grommets are made of plastic and they are found in the string holes of the tennis racket’s head. They protect the strings of your racket from the harsh surface of the ground and the edges of the string hole.

The size of a racket often determines the size of the grommet to be used in it. Small-sized rackets have smaller grommets. Similarly, bigger frames have bigger grommets.

While one may think that the congruence of the size is not just about the fit, but there is an angle of performance too. Small grommets prevent excessive pressure from breaking the strings or the frame. On the other hand, big grommets are designed to prevent movement inside the frame and cause loss of control during the game.

For any racket sport in the world, strings play a major role. The strings act as a surface that hits the ball when it lands on the racket. Strings vary in terms of material, thickness, and the way of stringing them to the racket. 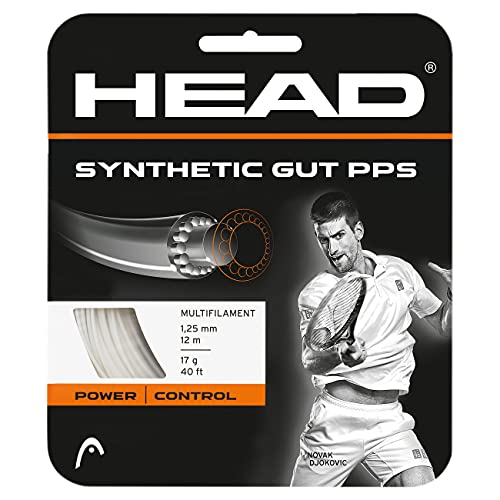 Strings have the ability to control your game, which means they can affect your performance to a great extent. They can influence your power, control, spin, and even vibration during the game.

Even the string pattern of a racket can have an impact on a player’s performance. Here are some of the most common ones.

This pattern has 18 mains (vertical) and 20 (horizontal) and therefore it gives better control and string durability. The 18x 20 string pattern is denser and it is great for hitting a stable shot by letting the ball hit more strings at once.

Most tennis players prefer the 16×19 string pattern as it increases the power and feel upon contact with the ball. It allows the players to hit the ball on the deeper side of the court and keep the opponent from coming near the net.

This is similar to the previous string pattern, but it is designed to increase power and spin. Since there are fewer cross strings, the ball flexes more in the open stringbed and also stays longer.

The 16×20 is known for amazing snapbacks that make the racket hit stable shots. This string pattern is denser in the sweet spot and more open in the outer parts.

To see how a tennis racket is strung, you can watch this video:

This is the part where the head of the racket connects with the parts. Normally, the throat of a racket is made of two curved sticks from the head. A vast majority of rackets today come with an open throat design which gives a better balance to the racket as more air passes through it. 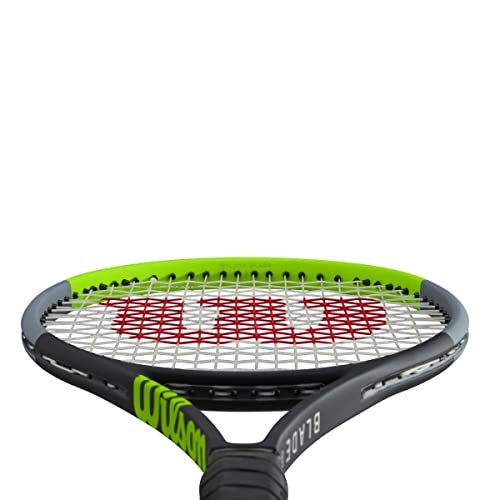 As mentioned above, the shaft is the part that joins the throat to the grip. It is made of strong materials and has the ability to take on an endless number of shots without breaking. 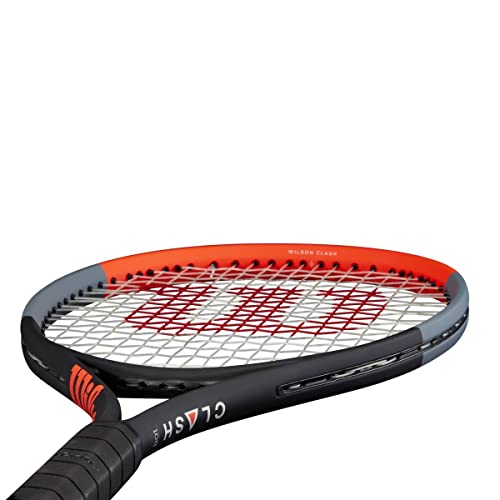 The handle is the part where you hold the racket while playing. It has a layer grip which makes sure that the racket does not slip out of your hand. The grip can be removed and replaced when it is worn out or you can upgrade your racket with a better one. 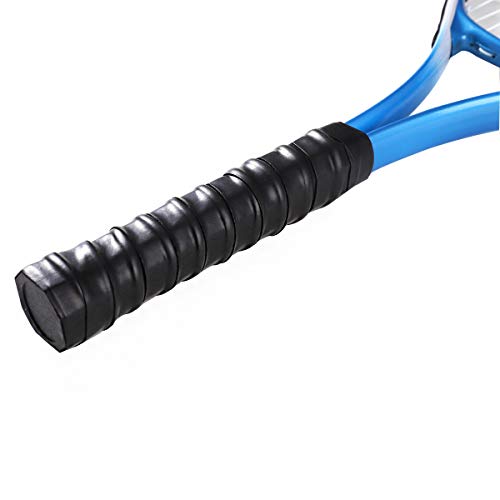 Most manufacturers make the handle out of graphite to make it stronger and lighter on the hands. Commonly, a handle’s circumference is kept around 4-inches to 4 ⅝ inches.

Racket grip comes in various types; they differ on the basis of size, grip design, and material. The most important among them all is the grip size. Having the right grip size can add confidence to your performance and reduce the possibility of injury drastically.

It is the lowest part of the racket and also an important one. Tennis racket butts are slightly bigger as it prevents it from sliding out of the hand during a game. 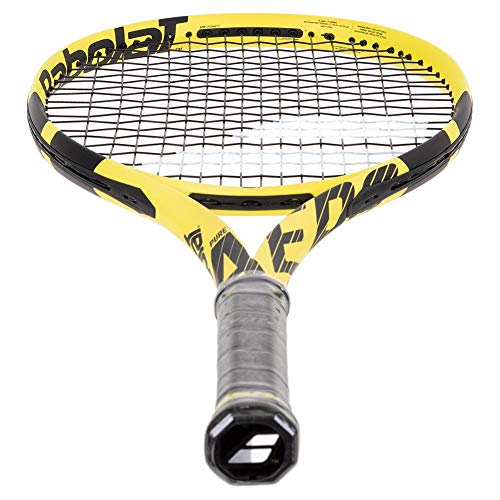 As the butt keeps the racket from slipping out of your hand, the butt cap seals it shut. Conventional butt caps are of no use to the player apart from keeping the structure of the maintained. 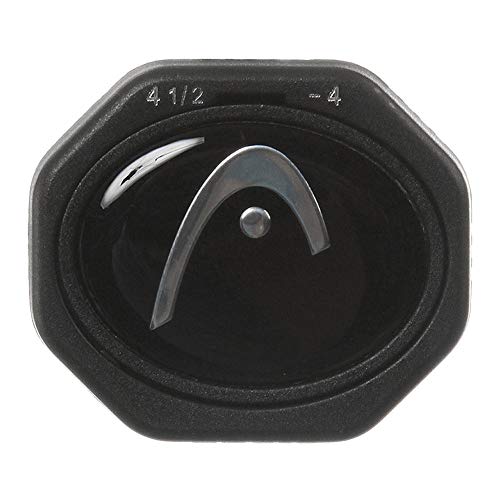 Some butt caps come with removable trap doors that can be removed to add different materials that can increase the weight of the racket.

Companies put their logos for branding or write the model number of the racket. It can also be used to attach gadgets that can analyze your game and improve it.

There are some parts in a racket that don’t make a huge difference but have specific functions that make them essential.

The grip tape is a small film of plastic or rubber that is wrapped on the top part of the handle. It keeps the grip together and prevents it from unraveling. 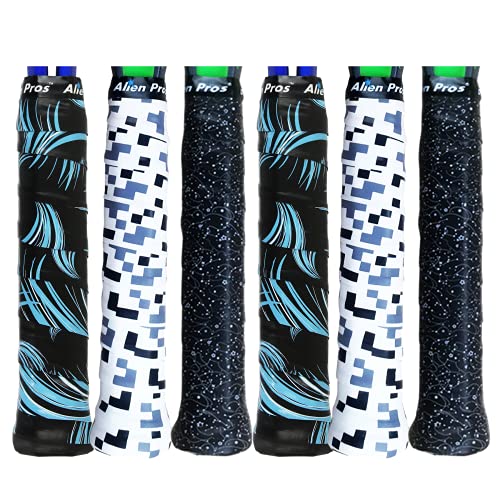 Rackets also feature a rubber collar that is placed on the top of grip tape for extra security. The collar is a great addition to a tennis racket as it allows you to secure the secondary grip that you might want to use for performance improvement.

There is a high possibility of the racket slipping or twisting from hands due to the swift and powerful movements of a tennis game. To help players get out of this situation, racket manufacturing companies have added bevels to the handles.

A bevel is a flat side of the wood, and a tennis racket has eight such bevels on the handle. These bevels keep the handle from twisting or rotating in the hands during a game. They are also used as guides when players are learning to get a grip of the tennis racket.

There can be no game of tennis without a tennis racket, and while there are a lot of options available in the market, you need to look for these essential parts to get the best one. Furthermore, also check on the quality of these parts as it can affect the durability and strength of a racket.