Playing pickleball is addictive thanks to the high cardio agile movement and exhilarating action. For a dedicated player, each time you step on to the court, you want to prove something. Such is the elation that even when you’re playing against a higher-ranked opponent, the nervousness fades away as soon as you hit the court.

Whether you’re a beginner or an experienced pickleball player, you can relate to the excitement and enthusiasm that comes with this sport.

Winning a couple of games against your siblings and friends might give you a sense of accomplishment. However, that’s far from what you experience when playing at a professional level. if you want to transition your passion for this sport into a professional pickleball career, here’s everything that you need to know.

When talking about basic rules, we’re not going to bore you with the ground basics of the game. Since you have already been playing the game, it can be assumed that you are aware of the basic rules. Thus, here, we will talk about the rules that will get you ready for the tournament.

Before you learn different things about pickleball, you need to understand the rules of scoring first. If you know the right way to score and keep a track of it, you can strategize the game to win:

The first and the most important thing about scoring, the points are only scored by the serving team and not the receiving. When the game starts, the player on the right side serves to the diagonally opposite side of the court.

The scoring in a singles game is similar to the doubles game apart from the fact that there are no second servers.  Serve is done from the right side when a score is an even number and from the left side when the score is odd.

When playing pickleball, the score should be called as three numbers. The correct way to call out the score is by saying the server score, receiver score, and the server number.  At the beginning of the match, the score will be announced as 0-0-2.

Pickleball is a point-based game and to win you have to score more points than your opponent to win. It doesn’t end here professional pickleball tournament has three rounds and the player who wins two of them is the winner.

Each round is 11 points.

The ball bounce rule may seem basic but it has great significance in the pro games. It is the initial rule that starts the game. When starting the game, the player on the serving side has to serve the ball and ensure that it lands on the opponent’s court with a bounce.

Similarly, when receiving a serve, you have to ensure that the ball bounces once in your court before you send it back.

A pickleball court is very different from a badminton and tennis court. It is smaller in size and has a 7-foot long no-volley zone or affectionately referred to as ‘Kitchen’. It is prohibited to hit a volley in this zone and doing so is considered as a fault.

A fault is basically any act that halts the game due to a rule violation. However, unlike other games, the outcome of faults in pickleball is totally different.

What acts are considered as a fault in pickleball:

Common strokes that you need to know:

Like every other sport, pickleball is also a strategic game. The strategy lies in hitting the right shot at the perfect time. In order to do that you need to know some advanced shots. Here are some shots that you can play to stay on the lead, against your opponent.

When the ball is hit before it hits the ground, it considered a volley. A volley is any hit taken as long as the ball doesn’t touch the ground, it can be an overhead ball too. However, you need to keep in mind that you can’t volley in the kitchen. If executed with a strategy a volley can be a point winner.

The lob is the most infamous shot in pickleball. When you and your opponent are stacked too close to the kitchen, a lob shot can be used to reset the pace of the game. A lob shot quickly bounces over your opponent’s head and when they run back to the court, you can take the net.

When a ball goes around the net (not over the net) and a player of the opponent team hits it, it is considered as ‘Around the pole’ or ‘ATP’. It is a common move executed by players while playing and the skilled execution of this move can get you a point.

There are times when you may face-off against an aggressive opponent who is constantly returning your serves with a powerful shot. It may seem like an impossible situation but if you know the block shot you can turn the game around.

Performing a block shot is very simple, you just have to stick out your paddle in a backhand position and let the ball collide with the bat. Since there is already too much force coming with the ball, you don’t need to swing the bat.

If you play the block shot correctly, the ball will simply go back into your opponent court with a limp that will make it hard to return. Block shots can lower the pace of the game so that you get an advantage.

A backhand punch is a cool looking shot that can help you catch your opponent off-guard. The shot basically involves you punching the ball. All you have to do is put your paddle in the backhand position and pretend like you are punching. This shot can make a high dink into a targeted shot.

The key to winning any game is to have a strategy and in pickleball, there are different strategic approaches for every game. Here are some basic strategies that you can try to stay a step ahead of your opponents:

Strategy for a singles game:

A singles game is full of thrill and excitement as you and your opponent face each other off. It can be easy to win against a beginner but if you are playing against a pro, you have to play very carefully. Here are some strategic tips that can help you play like a pro:

Strategies for a doubles game:

Doubles competition involves coordination, skill, and a good strategy. Even though you might have a great player with you, but that isn’t enough to put you in the front seat given that your opponents will be equally talented.

To confirm your win, you can implement these strategies in your game:

Getting to the net:

Move with your partner in unison:

Understand pickleball is more about placement than power:

However, experienced players are proficient at playing backhands but due to the high power generated by the cross-body movement, these often result in over-hitting.

To understand the doubles strategy better you can watch this video:

Communicate with your partner:

Pickleball doesn’t have a whole lot of equipment. The main gear comprises shoes, balls, and most importantly – A paddle.

Having the right paddle that supports your playing style can improve your game to a great extent. There are various factors that you must consider when choosing a pickleball paddle – Material, core, grip, weight, and length. For instance, in pickleball, paddles that are made of high-tech graphite have no weight or thickness barriers. As opposed to that, you have cheaper composite paddles and expensive fiberglass paddles.

Regardless of the paddles you choose, remember that it cannot exceed a total length of 24 inches. 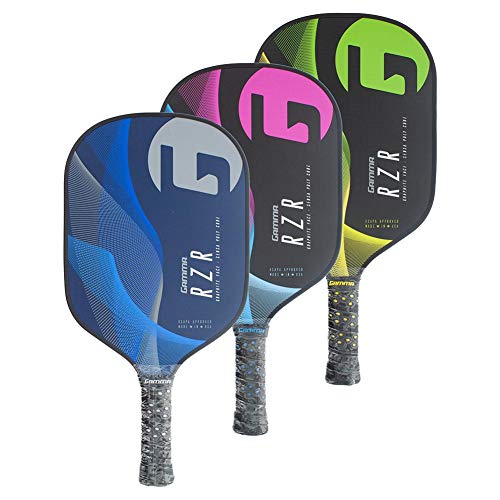 There is a wide variety of paddles available in the market – legal and illegal paddles. As a player looking to turn professional, it’s advisable that you follow USAPA’s guidelines regarding pickleball paddles and try to use paddles that comply with its standards.

In terms of other pickleball equipment, the game is played with a Wiffle ball that is hollow and has a 1/3 speed of a tennis ball. And any decent sports shoes that offer good grip on turf courts can be useful.

There are many things that make pro players stand out from a rookie – perseverance, practice, and a great presence of mind. You can develop these qualities on your journey towards becoming a successful pickleball player. I hope the above information helps you in becoming a pro player. If you have any queries or suggestions you can drop them in the comments below.